Randy Jackson and Aerosmith front man Steven Tyler will be back on the American Idol judges’ panel for season 11, as expected, along with host with the most Ryan Seacrest. Fox’s third judge, however, Miss Jennifer Lopez, seems to be humming a different tune — namely the Clash’s Should I Stay or Should I Go.

“You know, this is the question of the hour,” Jennifer Lopez told BBC Radio a few weeks ago. “I don’t know. I haven’t been forced to make a decision and I’m glad about that because, honestly, I’m very on the fence about it… I had an amazing time doing it and I loved it, but I have a lot of other things happening, and it’s going to come down to me making a choice of what I want to do for the next year and we’re not really at the breaking point of, ‘You have to make a decision right now!’ I’m just really enjoying the time of just waiting and seeing.” 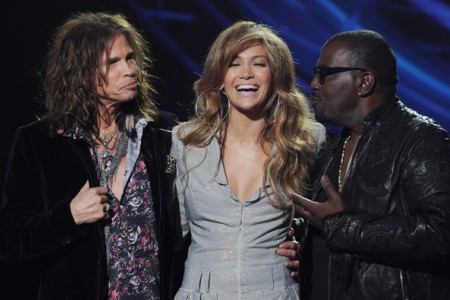 With July upon us, it seems this question is going to last more than an hour, begging the question: Could this turn into another summer of ‘Who will be an American Idol judge?’ Last year, it was a running guessing game, with folks like Bret Michaels, Chris Isaak, Harry Connick Jr., Justin Timberlake and Elton John making headlines that asked, “Idol’s new judge?”

Many TV talkers are tittering about what issues have Lopez “on the fence.”

As she said in the quote above, she certainly has her hands full. She’s promoting a hit album, Love, and a new perfume and is about to clock in for a new hosting gig that will take her on the road this summer. She and hubby Marc Anthony are set to share the mic for Simon Fuller’s upcoming Latin American talent show Q’Viva (The Chosen), which will be shot in English, Spanish and Portuguese and air in 21 countries in North America, Central America and South America, simultaneously.

Some, however, suspect Lopez has other, more conventional TV biz reasons, suggesting Jenny from the Block is just jockeying for a pay hike. She banked a reported $12 million her first season on American Idol. The problem is, Simon Cowell was banking $35 million and, the story goes, J Lo wants a piece of that action.

Or perhaps it’s not about the paycheck, but the promotion. Lopez’s Idol gig certainly helped put On the Floor on the map, and it’s been a while since J Lo’s seen herself on that map! The thing is, she won’t have a new album to promote next season, so will she still want/need Idol?

Of course, Lopez could go with the momentum, like Steven Tyler. The rocker, who has a two-year deal with AI, rode the Idol wave with a book launch and single under his arm, and it looks like he’ll be armed for next season’s wave, as well. He and Aerosmith are back in the studio working on a new album.

Readers of SheKnows might note that J Lo has another big responsibility, one that many gossip sites are failing to recognize: She’s a mom to twins! After hitting Europe to promote Love, Lopez told Extra, “My mom was with me and the babies and we had a good time. But it’s tiring… those trips are tiring.” 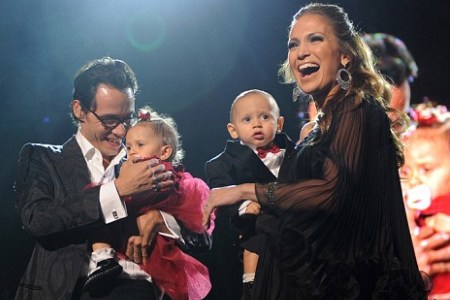 So, will she stay or will she go? Everyone’s staying tuned to see what Lopez decides, including her pals on the Idol judging panel and, likely, folks who wouldn’t mind taking her seat on the panel should she choose to go…