Justin Bieber had some harsh words for a security guard outside the BET Awards. Here’s how it all went down. 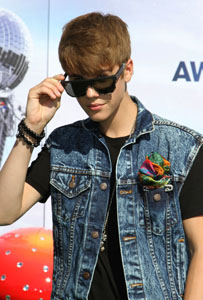 Justin Bieber has a mouth on him. The teen idol got all riled up at the BET Awards last week when one of the on-site security guards wouldn’t let Bieber’s own bodyguard through the gate — even though Bieber was a presenter.

TMZ has a video of the altercation. In it, you can see it all started because Bieber’s bodyguard didn’t have a ticket. BET security was utterly inflexible, repeating over and over, “You gotta have a ticket… You know how many security guys I’ve turned down today?”

Bieber was attacked outside of Macy’s in New York City just days earlier and was not going anywhere without his bodyguard — and he let the doorman know it.

“I need my security with me,” Bieber said. “This guy’s a douchebag.”

Eventually BET staffers let Bieber’s whole crew inside. A rep for the BET Awards brushed off the incident, saying, “It is our standard policy to make sure everyone has their tickets or credential upon arrival. Justin had the proper credentials.”

Beliebers: You have a new enemy.