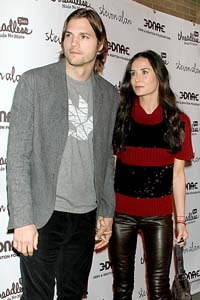 Ashton Kutcher must have felt pretty feisty last night — and he unleashed his anger at New York City’s mainstay newspaper, The Village Voice. The actor went on a Twitter tirade against the paper’s article that alleges the number of sexual trafficking victims described by Kutcher and his wife, Demi Moore, is nothing short of false.

“It’s between 100,000 and 300,000 child sex slaves in the United States today,” Kutcher told CNN’s Piers Morgan of how many children are prostituted each year. “If you don’t do something to stop that, that’s when there is something wrong with you, in my opinion.”

“There are not 100,000 to 300,000 children in America turning to prostitution every year. The statistic was hatched without regard to science. It is a bogeyman,” reporters Martin Cizmar, Ellis Conklin and Kristen Hinman wrote in their article Real Men Get Their Facts Straight.

“Law enforcement records show that there were only 8,263 arrests across America for child prostitution during the most recent decade,” they continued. “That’s 827 arrests per year.”

Kutcher was pretty upset about the article — and he let them know it.

“Hey @villagevoice hows the lawsuit from the 15 year old victim who alleges you helped enslave them going?” Kutcher tweeted at the newspaper, referring to a lawsuit brought on by an underage sex worker “for knowingly allowing her pimp to post ads for her ‘services’ on the popular backpage.com.”

“Hey @villagevoice speaking of data, maybe you can help me… How much $ did your ‘escorts’ in you classifieds on backpage make last year?” he continued.

Heavy stuff. Kutcher and Moore have taken on sexual trafficking with their DNA Foundation and Real Men Don’t Buy Girls campaign. Moore even traveled to Nepal to film a documentary on the country’s child slaves for CNN. It aired on the network last weekend.

“Hey @villagevoice if you ever want 2 have a productive conversation about how 2 end human trafficking as oppose to belittling my efforts lmk,” he continued. “Hey @villagevoice I’m just getting started!!!!!!!! BTW I only PLAYED stupid on TV.”

They didn’t respond quickly enough for his liking. “No Response @villagevoice? Oh I forgot U work business hrs. Maybe that’s Y you sell girls on ur platform. they tend 2work the night shift.”

The Village Voice didn’t back down from Kutcher. Instead, the newspaper tweeted a series of messages in response.

“Where’s your fight now, @aplusk? Did you sleep in, or are you just tuckered out from last night’s Twitter tirade?” read one tweet. “OK @aplusk, we’ll bite. Tell us the hard facts you have collected. We’ll fact-check for you.”

The paper even retweeted one message from another Twitter user that shows how they feel about Kutcher.

“Hey @villagevoice Doesn’t @aplusk own bio explain it all? ‘I make stuff up, stories mostly.'”

Something tells us the fight is just beginning.

Whose side are you on: Ashton Kutcher or The Village Voice?