Reports of an apparent Jonathan Rhys Meyers suicide attempt are circulating after the actor was found slumped on the floor of his London home Tuesday night. 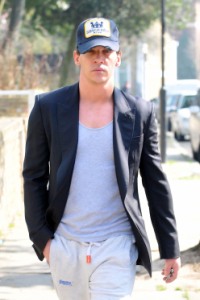 Jonathan Rhys Meyers’ suicide attempt reports from The Sun contain frightening details about the events of Tuesday night. According to the paper, the 33-year-old actor was found slumped on the floor of his home by paramedics who had been called to the scene.

Tudors star Jonathan Rhys Meyers is believed to have “downed pills” at his London home. Paramedics arrived at the scene after an unidentified person called 999, however, they were unable to help the star because he refused treatment.

Unable to force Jonathan Rhys Meyers to accept their help, the paramedics called for the police. Scotland Yard confirmed: “Officers were called by London Ambulance Service following reports of a man refusing treatment. The man was taken to hospital.”

Jonathan Rhys Meyers was released from the hospital early Wednesday.

A source reportedly said, “This is very sad. It was the opinion of those present that he tried to take his life.”

A female neighbor of Jonathan Rhys Meyers, seen here walking about in London in March, said, “I saw the ambulance arriving and was worried to death. Jonathan is a lovely guy. You see him all the time in the street. He says hello and is very pleasant. I hope he is fine.”

Jonathan Rhys Meyers’ rehab history is long for his young age, starting in 2005 when he sought treatment for alcohol abuse. The Sun reports, “Earlier this month he checked into a five-star rehabilitation centre in South Africa — his fifth stint in rehab.”

There has yet to be any official word from a representative on the alleged Jonathan Rhys Meyers suicide attempt.