Justin Timberlake is switching his alliance from The Social Network to MySpace — he just bought a stake in the company. 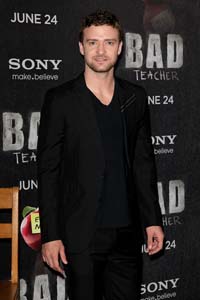 Is Justin Timberlake the savior of the long-suffering social network MySpace? The singer and actor thinks so — he just bought a stake in the remaining fragments of the company.

“There’s a need for a place where fans can go to interact with their favorite entertainers, listen to music, watch videos, share and discover cool stuff and just connect. MySpace has the potential to be that place,” said Timberlake in a statement.

Well, Timberlake didn’t plunk down the money himself — but he does have a minor stake in Specific Media, the company that did.

“Art is inspired by people and vice versa, so there’s a natural social component to entertainment. I’m excited to help revitalize MySpace by using its social media platform to bring artists and fans together in one community,” Timberlake added.

It’s interesting that Timberlake bought MySpace: He starred as Sean Parker in The Social Network — aka the Facebook movie — plus, he questioned social networking when we asked him about it last year.

“I think social networking in general is still a hypothesis. I find that people are still asking the question: Is it a good thing or is it a bad thing? It shows how kind we are. It shows how cruel we are. The accessibility and instant gratification of having all of your photos and profile lined up, I think that’s what makes something like a Facebook so great to people. We still wonder if it’s going to create great things in the world or if we will just waste away with it,” Timberlake told SheKnows while promoting The Social Network.

So, does he have an obsession with the web?

“No, I don’t think I’m obsessed with anything online. I’m a few years clean,” he said.

Can Justin Timberlake save MySpace?