Sarah Palin was shocked and confused by a documentary in which throngs of celebrities trash her. 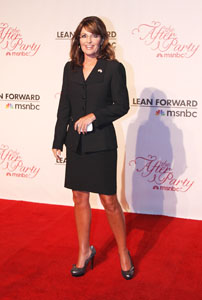 Sarah Palin may be one of the most polarizing political figures of our time, so it’s a little surprising she doesn’t realize how strong the emotions are that she evokes.

She knows now. Palin was treated to an advanced screening of a documentary called The Undefeated, in which stars like Matt Damon, David Letterman, Madonna, Howard Stern, Bill Maher and Louis C.K. rip her to shreds.

Some choice portions of the film show Madonna telling a concert crowd she wants to kick Palin’s ass, Louis C.K. mocking her special needs son Trig, Matt Damon calling her “totally absurd” and saying that her being president would be like a “bad Disney movie” and much more.

“What would make a celebrity, like you saw on screen, so hate someone that they’d seek their destruction, their death, the death of their children?” Palin asked. “What would make someone be so full of hate and, I guess, a sense of being threatened that they would want to see that person destroyed?”

The so-called documentary is a thinly-veiled puff piece promoting the former Alaskan governor and Republican vice presidential nominee. The Undefeated will be released on July 15.