Javier Colon secured his win on The Voice with his duet with Stevie Nicks on Landslide.

Javier Colon showed just why he deserved to win the first season of The Voice with his stirring rendition of Landslide with Stevie Nicks. The emotional song nearly brought Adam Levine to tears. 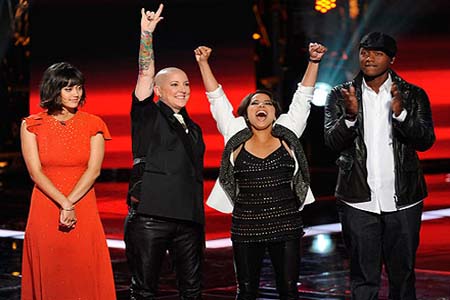 “I’m pretty speechless. You just sang with Stevie Nicks and it is one of the most beautiful duets I’ve ever heard. Now you’re one of my heroes. You deserve to win this competition,” Levine told Colon.

“Before I came out to do this audition in January, I had been rejected from yet another record label that I really thought [I was] gonna get,” Colon said after winning his crown.

Colon admitted that he thought his music career was over, but his brother made him audition for The Voice.

“I thought, I can’t just keep living on a dream and expecting that things are going to work out because it’s not just my wife and I anymore,” Colon said of his growing family.

However, the crown jewel of Team Adam didn’t think he was going to win.

“I wasn’t expecting to win, honestly,” Colon said. “I, 100 percent, thought [host Carson Daly] was going to say Dia Frampton and she is most deserving of it. She is amazing. I think any one of us, Vicci or Beverly or Dia, we all are deserving of the title.”

Levine had more confidence in his main man.

“It’s his voice. That’s all you need. The name of the show is The Voice. I just like the fact that the winner really reflects what the show is all about.”

What can we expect from Colon’s debut album?

“Me and Adam are definitely going to get into the studio and do some things,” he revealed. “Even Cee Lo [Green] and I talked about doing some stuff as well.”

Did the right singer win The Voice?