Alicia Silverstone is talking about her newborn son. Why did she choose Bear Blu for his name?

Alicia Silverstone joined the ranks of other celebrity moms when she named her month-old son Bear Blu. The new mother — married to Chris Jarecki since 2005 — said it was her hubby’s mother that came up with the name. 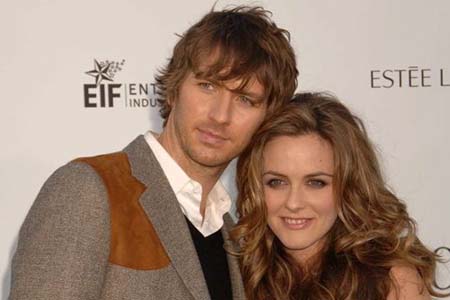 “We had narrowed our list to five boy names, and then we couldn’t really decide,” the Clueless actress told Us Weekly. “He suggested Bear or Blu, and I loved them both.”

As for people’s reactions to baby Bear Blu? Most people think the name is “super cute,” according to Silverstone. Plus, she said that her husband is a great help.

“He’s great at changing him and giving baths, and he massages him a lot,” she said.

“We are all three in love!” Silverstone wrote on her blog after her son was born. “I’m so grateful to this community for all the love, support, good wishes and happy vibes you’ve sent me during my pregnancy… it has been wonderful. Thank you all!”

So cute. Hopefully her son will think Bear Blu is cute when he hits junior high.

Weigh in: Where does Bear Blu rank on the scale of weird celebrity names?