Elisabetta Canalis is completely brokenhearted over being dumped by George Clooney, says her mother. 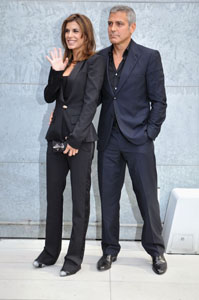 Moms make everything better. When you’re sick she makes you chicken soup. When your car breaks down she lets you use hers until it’s fixed. And when you’re dumped by one of the most eligible bachelors in the world after running your mouth about getting married, she handles the press for you.

At least, that’s what the mother of Elisabetta Canalis does. Mama Canalis spoke to Italian Vanity Fair about the split between her daughter and George Clooney and says the poor girl is taking it pretty hard.

“She is very down in the dumps,” Elisabetta’s mom said. “I’ve spoken to her, and she is very sad, but these things happen.”

Meanwhile her father sounds like he’s really going to miss Clooney. “He is a nice guy, good fun,” said Elisabetta’s dad. “We had a good time… He certainly would have made a good son-in-law.”

It is still not known what caused the split, but comments like “He’d make a good son-in-law” might have had something to do with it.