Being judged solely on your voice was the name of the game for NBC’s The Voice and after 10 weeks of nail-biting performances, Javier Colon was named the winner and Adam Levine got to say he discovered “the voice.” 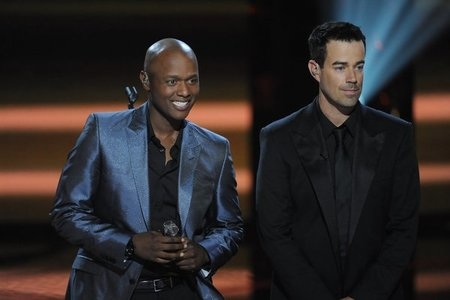 It was down to Dia Frampton, Beverly McClellan, Javier Colon and Vicci Martinez. After a finale that gave the contestants a chance to debut original songs, America couldn’t help but get behind Javier Colon, the hardworking dad that had things fall through so many times throughout his career, he was ready to pack it in.

After the Tuesday night finale of The Voice, iTunes was blowing up with downloads of both Javier Colon and Dia Frampton‘s songs. Those clicks went towards a vote and there was no doubt it was going to be a tight race. In the end only two percent separated the two.

Javier Colon is now the winner of $100,000 and a contract with Universal Republic.

Beverly McClellan (Team Christina Aguilera) and Vicci Martinez (Team Cee Lo Green) put up one hell of a fight in the race to catch Javier and Dia but America might have been sick of McClellan, the typical rocker girl, and the constant big voice of Martinez. Of course, that’s just speculation.

Dia Frampton’s original song, Inventing Shadows, went to number one on iTunes, which made us think she was the winner until the very end, but reality shows have a way of surprising us.

What did you think of Javier Colon and Team Adam Levine winning The Voice? Sound off in the comments section.