Jake Gyllenhaal is taking on his toughest role to date: Adventurer with Man vs. Wild star Bear Grylls.

Just when you thought Jake Gyllenhaal couldn’t get any hotter, he goes and signs up for a manly-man adventure with Man vs. Wild adventurer Bear Grylls. The episode — the first episode in the show’s new season — follows Gyllenhaal and Grylls as they rough it in a two-day trip to Iceland. 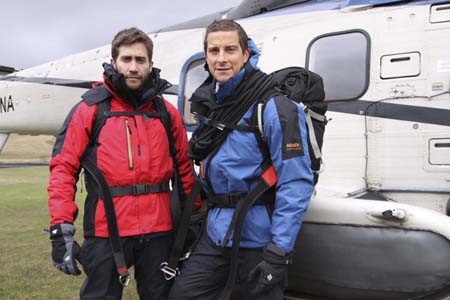 “For me, it’s all about discovery,” Gyllenhaal said about the trip that “neither will forget.”

The Discovery Channel just released a promo of the episode — man, they deal with some serious weather conditions, including extreme cold and wind. Lots of wind.

“Jake will have to go where Bear goes, eat whatever Bear eats, and on occasion even take the lead, if he’s going to cope with some of the worst conditions known to man,” Discovery said of the episode, slated to air July 11.

So how did SheKnows’ Sexiest Man do?

“The wild is always very revealing — not only physically but mentally,” Grylls said of his adventure with Gyllenhaal. “You’ve got to smile when it’s driving horizontal hail and be able to face your fears and just get on and do it — and on both of those accounts, Jake came up strong.”

The biggest question: Will Jakey drink his own urine?

What do you think of Jake Gyllenhaal’s stint into survivor mode?