Denise Richards has expanded her family by adopting a baby girl domestically. Get all the details on this new addition to her family. 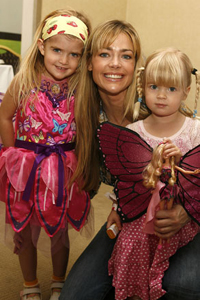 Richards, 40, has opened her heart and her home to a daughter named Eloise Joni Richards.

“Eloise Joni Richards is named after Denise’s mom (Joni),” her reps tells us. “Denise and her daughters Sami and Lola chose the name Eloise.”

Sam, 7, and Lola Rose, 5, are Richards’ children from her marriage to Charlie Sheen.

Domestic adoption means that Richards adopted Eloise from her birth parents here in the United States, instead of internationally. According to the Adoption Guide, in the majority of U.S. adoptions, the adoptive parents are selected by the birth parents, however, we don’t know if this is the case with Richards’ adoption.

It has been quite a year for Richards! After a rocky patch earlier this year with ex-husband Charlie Sheen, she has a new book coming in July (The Real Girl Next Door) and a baby girl to add to her family.

26 mins ago
by Kay Snowden

33 mins ago
by Kay Snowden