Prince Harry has a new sexy lady in his life, despite his claims to the contrary.

Remember how we told you that Prince Harry is single and doesn’t have time to date?

“Pippa? Ha! No, I am not seeing anyone at the moment,” the red-headed rebel said earlier this week. “I’m working a lot at the moment, so dating and watching TV are the last things I have time for.” 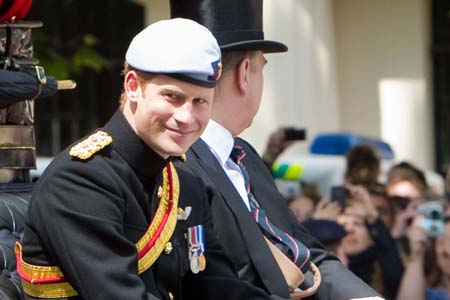 It turns out the cheeky spare heir was playing us all along — he’s actually dating someone new and it’s not Pippa Middleton. Harry is reportedly dating Florence Brudenell-Bruce, a lingerie and swimwear model, according to the UK Daily Mail. The relationship is in the beginning stages, so that’s probably part of the reason why he’s kept quiet about it.

“It’s very early days but Harry and Florence are an item… She is a lot of fun, blonde and very good-looking. Harry really likes her,” a royal insider said.

Brudenell-Bruce is not only beautiful, she’s also smart: The model has a degree in art from the University of Bristol and acted in a Bollywood movie. She lives in a $4 million home in Notting Hill. Basically, she’s the perfect catch. We’d date her too, though we’d rather see him with Pippa Middleton (still).

Will Brudenell-Bruce be the one? Who knows, but we likely won’t find out for a while.

“Not for a long time,” Harry said earlier this month when asked when he’s getting married. “Who put you up to ask me that?”

Uh, every girl in the world?

Besides, the red-headed rebel is set to head back to Afghanistan. “His course finishes in 2012 and after that his deployment will be a matter for the army chain of command,” a spokesman for the Ministry of Defense said recently.

We wonder how his new gal pal feels about that?