The 2011 Teen Choice Award nominees were just announced and the usual favorites scored plenty of nods (Twilight, Glee) as well as some R-rated movies, including The Hangover Part II and Bridesmaids.

If someone made a movie about a singing vampire that sparkles — they would probably be ratings gold looking at the 2011 Teen Choice Award nominees. 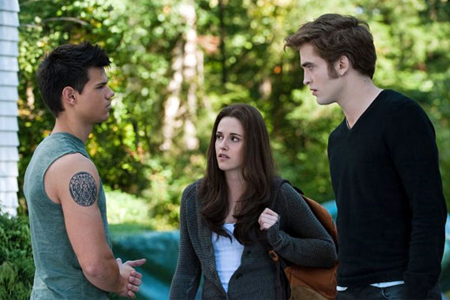 The Twilight Saga: Eclipse earned the most nominations with 12, followed by Glee with nine nominations and The Vampire Diaries with seven nominations.

R-rated comedies received plenty of nominations, which seems a bit odd since it rules out a large portion of the teens under the age of 17. The R-rated comedy, The Hangover Part II, received six nods, while the R-rated Bridesmaids gathered four nods and Bad Teacher earned three. On a side note, Kristen Wiig has to win in the Hissy Fit category for Bridesmaids!

What about Harry Potter? Emma Watson and Daniel Radcliffe are pitted against Twilight’s Kristen Stewart, Robert Pattinson and Taylor Lautner for the Liplock category.

For the music category, hot Hollywood couple Justin Bieber and Selena Gomez each received six nominations, as did Taylor Swift.

Choice male hottie has teens picking from Bieber, Taylor Lautner and Robert Pattinson, while the female hottie group has Selena Gomez going up against Kim Kardashian and Mila Kunis.

The Kardashians and Jersey Shore rule the reality show category — although Audrina Patridge got a nod.

Go to the Teen Choice Awards to see the complete list and to vote for your faves!

The 2011 Teen Choice Awards will air on August 7th on Fox.