Justin Bieber and Selena Gomez spent some cash — and dropped some ‘L’ bombs — Tuesday afternoon while shopping in NYC. 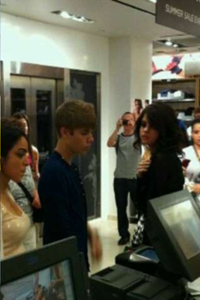 According to numerous onlookers, the couple strolled throughout the two-level store hand-in-hand and displayed some serious PDA and more than a couple ‘I love yous.’ Gomez helped the Biebs pick out a selection of A|X’s Pima cotton T-shirts, both crew and v-neck, in grey and white. They finally left the store around 6 p.m. with multiple bags in tow.

Oh to be young, in love and super-duper rich.

Bieber’s been on the promo trail for his new perfume, Someday. An appearance at Macy’s last week prompted mass chaos — and a scuffle broke out when an undercover cop tried to calm frenzied teen girls.

Gomez has a lot on her plate too — she just released her new album, When the Sun Goes Down, on Tuesday.

“I think each album kind of represents the time that I’m in,” Gomez said recently. “This album is really uplifting. It’s fun and upbeat and it’s got great messages, and I think it’s going to be a big summer anthem for a lot of people… hopefully.”

She’s also gearing up for the release of her new movie with Leighton Meester and Cory Monteith, Monte Carlo.

That doesn’t mean she always likes her jet-setting lifestyle.