Elizabeth Taylor’s famed jewels are going up for auction later this year. Want to buy a bauble? Break out your credit cards. 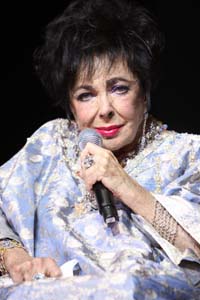 Elizabeth Taylor was known for her love of jewels — her perfume was named Diamonds, after all. Now, fans have the opportunity to get their hands on her baubles when they go on sale at Christie’s auction house later this year.

Taylor’s jewel collection is worth an estimated $145 million and includes a ruby and diamond Cartier necklace, the La Peregrina Pearl redesigned by Cartier, a heart-shaped Taj Mahal diamond and a 33.19-carat Krupp diamond given to her by her beloved husband Richard Burton. She reportedly wore that diamond every day.

Don’t have the cash to drop on a Taylor jewel? Join the club. Luckily, the Elizabeth Taylor Collection will go on tour for three months before the sale date, according to Christie’s. The tour will end at the New York auction house where it’ll be on display for another 10 days before going up for auction on December 13.

“[This collection] will bring us closer to the essence of Elizabeth Taylor’s unique spirit, and promises to inspire admiration, delight, and at times, sheer wonder, in all who come to see it,” said Marc Porter, the chairman and president of Christie’s.

The best part: All of the proceeds are going to the Elizabeth Taylor AIDS Foundation.

We’re already making plans to see the jewels on tour. We’re just hoping they have a ‘try it on’ option, because we really want to imagine what Taylor’s fab life was like.