Though decades apart, Cyndi Lauper and Lady Gaga have both ruled the pop music world. The pair, who share a passion for charity and an artistic view on life, have become close friends.

Cyndi Lauper and Lady Gaga are two musical blondes with big hearts. The pair became fast friends while working together on the Viva Glam campaign for the MAC AIDS Fund. 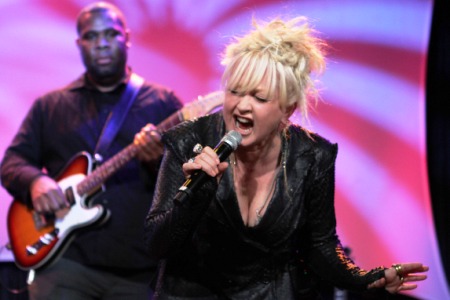 Speaking of the young singer, Cyndi Lauper told Wendy Williams, “She’s very committed. She’s going on to do it herself this year, though I’ll always help the MAC AIDS Fund.”

While Cyndi Lauper didn’t comment on Lady Gaga’s recent Japan earthquake bracelet charity woes, she did elaborate on what it’s like to know the Mother Monster.

When asked what she knows about Lady Gaga that the rest of us don’t already, the 58-year-old shared, “You know, she’s a gal from Jersey, so she’s one of us.”

Cyndi Lauper continued, “She likes things like a sculpture. She’s a performance artist — like everything you see is a sculpture and it’s living art. I used to do things like paintings, everything for me was color. Color to invoke all kinds of things.”

“You know the whole thing with the Girls Just Want to Have Fun video?” she asked Wendy. “I went and made sure that it was multi-racial because I wanted it to speak to everyone.”

Wendy added, “And Gaga definitely does that too. You know what? She’s lucky that she has you on the speed dial, to be able to talk to you.”