Add another drug to Charlie Sheen’s pharmacy: The actor says he used steroids to prepare for his role in Major League. 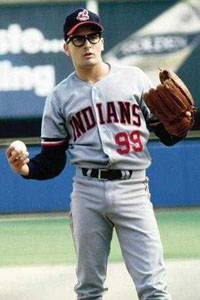 Of all the drugs in the world that we were pretty sure Charlie Sheen had done, steroids never crossed our mind. Sheen has surprised us once again — the actor told SI.com he used steroids to bulk up for his role as Wild Thing in the hit ’80s flick Major League.

Sheen was chatting about the movie when the subject of Wild Thing’s trademark thunderbolt haircut came up — and the steroid secret came out.

“I didn’t like the haircut because it generated so many comments in bars,” Sheen told SI.com. “I’ve got enough of that already. Add that to the mix, and it’s a recipe for a fistfight. I was already bitchy because — let’s just say that I was enhancing my performance a little bit. It was the only time I ever did steroids. I did it for like six or eight weeks. You can print this, I don’t give a [expletive]. My fastball went from 79 to like 85.”

Unfortunately the drugs also affected his temper. “But my [expletive] meter went pretty high also… I wasn’t doing enough to be completely insane — just a little bitchier than normal. When you combine the haircut with all of those comments, you’ve got a recipe for disaster.”

So why did he do it?

“It was all ego, vanity,” Sheen said. “I think it led to my arm problems because it doesn’t enhance the strength of the tendons and ligaments, it just makes the muscles bigger.”

If you ever saw his Rambo impression in Hot Shots, you’ll understand why we suspect he may have picked the habit back up then, too — but Sheen was only talking to SI.com about Major League because of his love of baseball.