In Larry Crowne, Julia Roberts and Tom Hanks reunite, after appearing in Charlie Wilson’s War, to play student and teacher in a comedy that aims to set itself apart from the big budget Hollywood fare of summer.

Larry Crowne premieres July 1 and Tom Hanks and Julia Roberts recently sat down to discuss the film that Tom Hanks directed and co-wrote with Nia Vardalos. The film was a family affair as Hanks cast his wife Rita Wilson in a role while Vardalos had her hubby — Cougar Town star Ian Gomez — also playing a part in Larry Crowne. 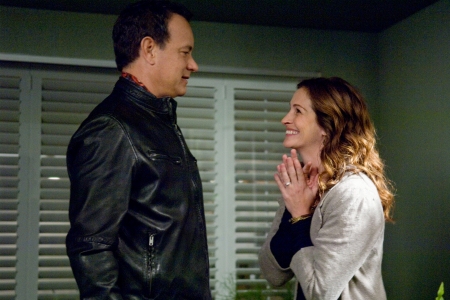 Larry Crowne follows the title character (Hanks) as he begins the film on top of the world as a manager of the retail superstore U Mart. When he loses his job because corporate sees little advancement from him due to the lack of a college degree, Larry decides to go back to school. It is there that not only does he find himself, but also a potential romance in his speech professor, as played by Roberts.

Believe it or not, the film is only the second time these superstars have appeared together on film, although they have been great finds for over a decade. Join us as the Larry Crowne stars dish their friendship, working with spouses and how Hanks hopes to have his timely comedy-drama strike a chord with summer movie audiences tired of explosions, special effects and sequels. 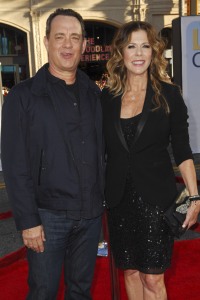 SheKnows: Tom, what is it like to work with your wife Rita Wilson and to also have husband-and-wife team Nia Vardalos and Ian Gomez both on set and have that kind of family aspect to this film business?

Tom Hanks: My wife and I, we met making a movie. This is not just our job, it’s our life. It’s what we do naturally whether we’re working together or not. I gave the script to Rita and said, “Okay, Julia Roberts is playing one part. The other part is Gugu (Mbatha-Raw). So who do you want to be?” So she picked that out and she went to town on it and it’s just a blast. It’s fun. It’s what we do for a [living]. We’re amazed we get paid to do it.

Julia Roberts: And she was a hot blonde.

Tom Hanks: I said, “Baby, is there any way at all you could take that wig home at the end of the work day? Can you just keep it on? Let me take it off later on tonight.” [Laughs] No, I’m joking, but it’s just one of the great things that we get to play at work. It’s fantastic.

Julia Roberts: Well, I would just like to say this about all the married people working together on the set: It was just a joy. That is the great joy to go to work with people that you love, whether they be people that you are in love with or people that you just love, and be creative and artistic and make things that you want to send out into the world and make people feel good. It was a great environment to work in for me. Leaving my family behind and coming with all these people, it was a dream. It’s so we do what we want to do and we appreciate that.

Roberts & Hanks head back to the beginning

SheKnows: How did your friendship start, you two?
Tom Hanks: We’ve known each other I’m guessing 10 years. We met, we figured this out…

Julia Roberts: Well, we can’t really remember when we met, but we figured out when we became friends.

Julia Roberts: We did an inexplicable photo shoot now that we think about it.

Julia Roberts: We did. 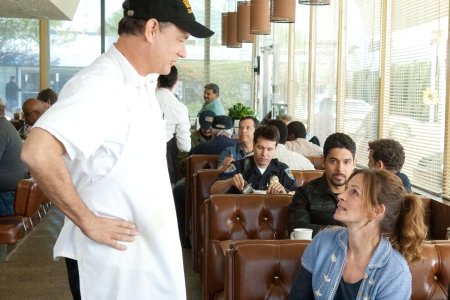 Tom Hanks: And from there, it became a pleasant thing — and then Charlie Wilson’s War and then we wrote this.

SheKnows: Julia Roberts, in the movie, your husband has some bad habits. In your real life, what are some behaviors that you would never allow?

Julia Roberts: Well, luckily I’m happily married to a person that I admire and enjoy so it’s not really fair to say or to conjure some kind of bad scenario that I wouldn’t tolerate. I mean, people have their different ideas of what’s good and what’s happy, and in this particular scenario that Tom drew for me, it was fun to play, and Bryan (Cranston) is hilarious. But yeah, it’s sad for both of them the situation they’ve gotten themselves into in that house.

SheKnows: Tom, you’re not going to wait another 10 years to direct another film, are you? 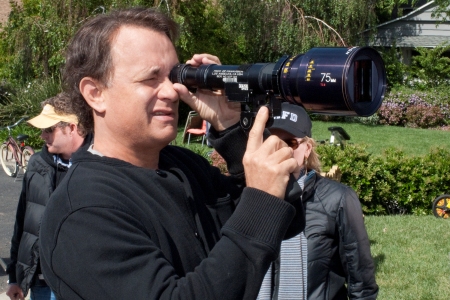 SheKnows: Was this film harder simply because you were the star of the movie?

Tom Hanks: In all honesty, I’ve made quite a number of movies like Castaway and a few others where I’m the only guy in the movie, and the only place to be is right next to the camera, in costume, ready to go, in order to get it. The best way in order to go about this is to relatively seamlessly jump in as Larry, come back, go back and forth, and just play because the good news is, if you’re the boss, if it ain’t good, you don’t use it. You just cut it out.

SheKnows: What was it about Larry Crowne and its themes that made you want to stick to it and get it made after six years?

Tom Hanks: I wanted to examine the theme of reinvention. The film really began: I lose my job, I go to college and my teacher is Julia Roberts. What would happen? And then we go back and then you continually fill up the reasons that he goes to college in the first place and what those issues are. It’s not a mid-life crisis. It’s a mid-life disaster. Larry thinks it’s the greatest day in the world and then he gets fired and he loses all of his community and possibly loses his house. It’s the type of movie that I myself am attracted to as an audience-going guy. I think it’s a delicate balance trying to make a movie about it.

The message of reinvention 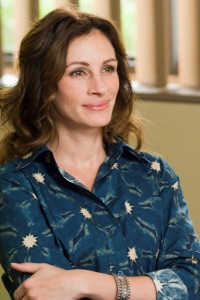 SheKnows: Julia, did you go to college, or just dive into the acting world?
Julia Roberts: I didn’t go to college.

SheKnows: How would you describe your education?

Tom Hanks: Sorry, I’m answering your questions for you.

Julia Roberts: Please do. Please, I beg you. I have very smart parents. I feel I learned a lot from both of my parents and life experience. Two of my three siblings are older so I suppose I learned from them and became a very avid reader at a young age, which I think enough cannot be said for what you can discover through literature. So I think that was probably my most valued characteristic as a teenager.

SheKnows: Larry Crowne is being released in the summer competing against the likes of Transformers — is it tough to compete when you have an adult-centered drama?

Tom Hanks: It’s going to be interesting because here we are in a summer of big time blockbusters. It’s not the summer, it’s year round. The nature of the movies is different than it was five years ago and they’re all driven by the possibilities of CGI which means you can make anything happen on screen that you can possibly desire. But when you’re going to try and have people talk in a room and actually reflect life as we know it and have people recognize themselves and their own street and their own house in it, well then you’re aiming for the high country and it’s a much bigger gamble. At the end of the day, it’s gotta be a good movie. It’s gotta be a funny movie. It’s gotta make people think, “Hey, I couldn’t have spent my time any better.”

SheKnows: Tom, both you and Julia go through a reinvention of sorts in Larry Crowne. What keeps you two vibrant in your minds and spirit?

Julia Roberts: I’m glad he said in spirit, because I was going to say lift…

SheKnows: Larry Crowne goes through a dark time in the film, was there a “darkest time” in each of your lives?

Julia Roberts: Well, the darkest moment for me would have been about the fifth day of shooting…

Julia Roberts: Of my life on Larry Crowne.

Tom Hanks: Yeah, that was a bad day. I called you the “C” word. It was horrible. I’m joking! Jeez!

Julia Roberts: Tom, when was your darkest moment? Did you find one in your life when you persevered and your life changed like Larry Crowne? 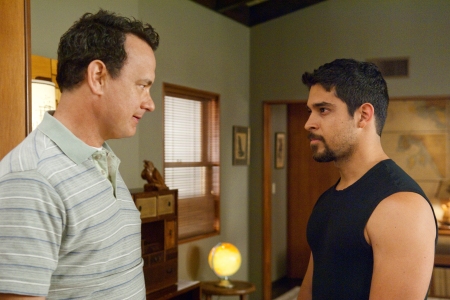 Tom Hanks: Oh man! Thank you, Julia. That was very well put. Quite frankly, our careers have been pretty well chronicled. But there is a time — I’m going to guess for both of us, where we’re living in a wretched house in the Valley that we cannot afford. We have been fired from the job that we had and it’s now been 13 months since you’ve actually worked in the city and the phone still is not yet ringing and you wonder if in fact you’re going to take the job at the Wienerschnitzel on Laurel Canyon. When you have that moment — that never quite goes away.

Julia Roberts: I had the Manhattan version of that. So not the Valley, it would have been on the East side.

Tom Hanks: What? Bru Burger? The Bruin Burger instead of the Wienerschnitzel?