Jada Pinkett Smith reveals how she puts her family first, how she gave up her rock star dreams and more in the July issue of Redbook. 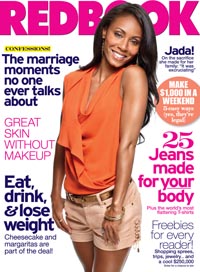 Jada Pinkett Smith talks candidly on motherhood and her priorities in Redbook’s July issue and she graces the cover. We love Jada for her frank discussions about all topics, including how she loves spontaneous sex. Her open personality shines through in the Redbook feature.

“I had to make choices. Believe me, I would still be on the road with my band, Wicked Wisdom, and making as many movies as I can a year, and doing all sorts of other things if I didn’t have the responsibility of a family,” Pinkett Smith explains. “But I have children with their own talents and dreams, and I know I have to be standing next to them for that journey.”

In addition to being a talented actress, Pinkett Smith is also a sought-after rock star. “When Jaden was auditioning for The Pursuit of Happyness, my band had just gotten an offer to open for Guns N’ Roses in Europe,” she says.

“For me, that was unbelievable. But the choice was: I could be a rock star, or I could be on the set with my son to make sure he was healthy and happy. We all know how that story ended!” She calls the decision to pass on the opportunity “excruciating.”

She also discusses what she and Will argue about the most and responds to critics’ accusations that she exploits her children. The Redbook article includes an exclusive private family photo album spread. You can pick up a copy on July 12th.