When SheKnows Celebrity Correspondent Whitney English sat down with True Blood‘s Kristin Bauer, the feisty Pam De Beaufort was nowhere in sight. In fact, the actress showed her softer side as she shed quite a few tears talking about her real life love story and intimate wedding. Her tale just might have the power to turn any cynic into a sentimental sap.

Kristin Bauer and Abri: A match made over music

“I had just announced to the universe that I needed a date,” she began.

As if cupid had heard the cue and came to the rescue, it was not long after her declaration that she met, fell in love with and married her husband, South African musician Abri van Straten. Hear that ladies? Sometimes all you have to do is take some initiative in this crazy dating world and ask.

From beginning to end, Kristin strings together the bits of their love story with tears on the threshold. She tells us how she came across his album by means of a stranger and soon found herself watching his music video over and over again. Her nieces even considered banning her from it!

“They were starting to worry,” Kristin said laughing. But in her defense, she couldn’t help it. “It’s such alluring music,” she says.

Ready to be dating again and captivated by Abri’s music, Kristin found the courage to track him down and ask him out. The rest was history. After a beautiful wedding on a fifty acre farm in Wisconsin, Abri and Kristin tied the knot. 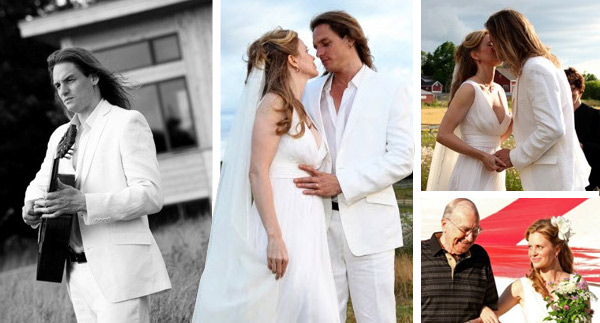 “It was a big family thing and it was great.” Kristin recalls little details from the romantic affair such as the bouquets made of flowers from the farm and her dad’s horse roaming in the backround. At this point we began to feel like we were reliving a love story straight from a movie script.

Watch the video to hear all the romantic details on how Kristin tracked down Abri all because of an empty chair, a song called Rain and a gut feeling. You might want to have some tissues handy for this true love fairy tale.

If you want less true love and more True Blood, watch Kristin dish about the show. >>