Raven Symone looks great with her new slim and trim figure. How did she do it? She recently revealed her stress-free weight-loss plan and cleared up those secret pregnancy rumors. 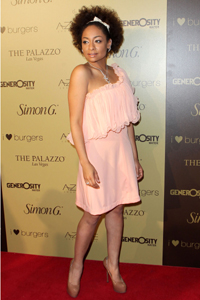 That’s So Raven star Raven Symone has been in the news recently for her dramatic weight loss (35 pounds!) as well as those pesky rumors that she was pregnant and had a secret baby. The star opened up about her 35-pound weight loss and the “really funny” pregnancy rumors.

Symone appeared on The Wendy Williams Show and told Williams that stress caused her weight gain when on the show That’s So Raven.

“I stopped stressing. You have to realize at 15, there was a whole entire show I had on my shoulders. It was a very big cast and crew and if you’re sick for a day, people lose money and that’s a problem,” Symone said.

So how did she turn the corner and start losing weight? “[It wasn’t] just overeating because I’ve actually been eating the same. I keep a little bit more smaller portions because I learned that your body has to get rid of that stress some way. Some people break-out, some people lose their hair, some lose weight, some people gain weight, my body just reacted a certain kind of way.”

Ironically, Symone will have to wear padding to make herself look bigger in her new ABC show, State of Georgia. “Ironically, my character is supposed to be the size that I was before,” she reveals. “So I have to wear thicker body pads on the show.”

She also opened up to The Insider about the rumors that she had a secret pregnancy and gave birth to a baby girl. There were also pictures of her rumored child, however, Symone says those rumors are “really funny” and the baby that is supposed to be hers doesn’t even look like her. She says that “even if I did date someone of Caucasian descent, my baby wouldn’t turn out like that.”

“I think because I was big for so long and at certain times fluctuated so much that they thought I had baby weight… just because I was thicker.”