Courtney Love is on the prowl for a new rich man after being dumped by her aristocratic British boyfriend — who happens to have very close ties to the royal family. 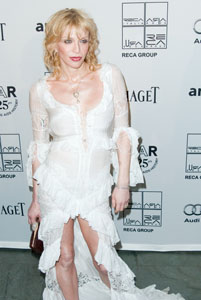 Courtney Love can forget about becoming Lady Love. The Hole frontwoman has been dumped by her aristocratic boyfriend, the Honorable Henry Allsopp.

It’s really too bad for Courtney, because Henry isn’t just any other Brit with a title — he is the godson of Camilla Parker-Bowles, Duchess of Cornwall and wife of Prince Charles!

The upper-crust family couldn’t be more relieved about the split.

“She had moved in within a month of meeting Henry last November and made herself quite at home,” a source close to Allsopp told Express.co.uk.

“Most of the family were rather alarmed by how besotted he was and feared she had delusions of landing herself a title — she used to joke about becoming Lady Love.”

Allsopp is heir to the fortune — and title — of former Christie’s chairman Lord Hindlip. Love has made no secret of her mission to land a rich man, telling The Fix, “These days I’m only interested in plutocrats.”

“Like really, really rich guys. I’m determined to land one sooner or later. The thing is, I think I can be a real asset to a wealthy man.”

Good luck with that.

Courtney has already moved on to rocker Jack Donoghue of the band Salem.