David Duchovny and Tea Leoni have separated again, after a three-year reconciliation. 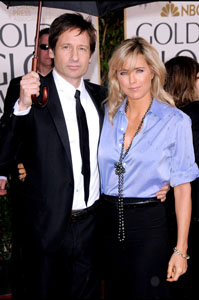 Tea Leoni is singing David Duchovny, Why Won’t You Love Me tonight — the couple has separated again.

Leoni’s rep officially confirmed the split for SheKnows first but provided no further details, so let’s wildly speculate, shall we?

Rumor has it that Duchovny’s character on his show Californication is not a far stretch from reality. In fact, Leoni and Duchovny separated briefly in 2008 when the X-Files star checked himself into rehab for sexual addiction.

At the time sources close to the couple were adamant that David did not have an affair, but was addicted to pornography and would spend hours in sex chat rooms. Of course, there was still that nagging little rumor about his tennis instructor…

This time there is a nagging little rumor about his Californication costar Eva Amurri, daughter of Susan Sarandon.

While Leoni and Duchovny have separated, friends of the couple say that so far they haven’t decided if they will file for divorce. Married since 1997, they have two children together.

Don’t know the song David Duchovny, Why Won’t You Love Me? Watch the video: