The Voice is packing up its final eight and hitting the road!

Want to see the eight finalists from NBC’s hit show The Voice on tour? Well, you can. Carson Daly confirmed during Tuesday night’s finale, Beverly McClellan, Vicci Martinez, Dia Frampton, Javier Colon, Nakia, Xenia, Casey Weston and Frenchie Davis will be heading out on tour this summer for the Sprint presents The Voice Live On Tour. 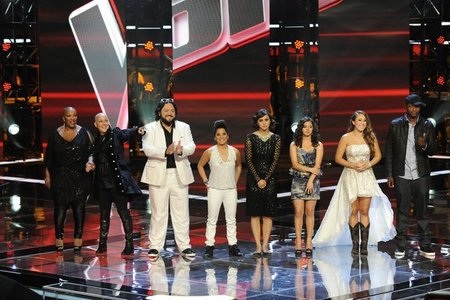 It doesn’t look like their superstar coaches Christina Aguilera, Cee Lo Green, Blake Shelton and Adam Levine will be joining them, but trust us, after seeing the finalists perform on The Voice, we’ll have plenty to be excited about.

So, when can you catch your favorite voices of The Voice on tour? Beverly McClellan, Vicci Martinez, Dia Frampton, Javier Colon, Nakia, Xenia, Casey Weston and Frenchie Davis are coming to a city near you beginning July 27 in LA! Holy vocal cords, that was fast!

Other cities included on the tour are Chicago, Boston, New York, Las Vegas and Wallingford.

As for who will be crowned the first winner of The Voice, you’ll have to tune in Wednesday, June 29, to find out. Who do you think will have the honor of saying they discovered the voice? Will it be Cee Lo Green, Blake Shelton, Christina Aguilera or Adam Levine? Tell us, we want to know.