Vanity Fair features a pretty blond they say is Emma Stone on their August cover, but if they hadn’t put her name in big letters on the photo we never would have known. 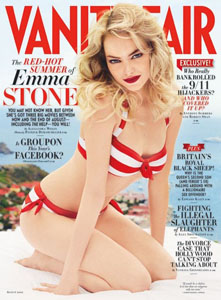 Blond or ginger, Emma Stone is beautiful — so we’re not sure why Vanity Fair chose a photo that looks nothing like the talented actress for their August cover.

She is recognized by the paparazzi though, and she told the magazine that they are starting to turn up the heat on her.

“He stands up while I’m walking to my car and is like, ‘Hey, Emma! Listen, I’m going to delete these pics. Here’s my card,'” Stone told Vanity Fair. “‘If you ever go to the beach with your friends or walk out of your house in your pajamas, call me.'”

“These guys try to strike up a deal with you so you feel like they’re your friend. I didn’t even know that was a thing — that people would call them.”

Stone, who deleted her Facebook because she “got addicted to FarmVille,” also described her most devastating Hollywood moment at an audition for Heroes.

“I could hear that, in the other room, a girl had just gone in and they were saying, ‘You are our pick… On a scale of one to 10 you’re an 11,'” Stone said, adding that minutes later Hayden Panettiere — who would later star in the show — walked out of the audition room.

“I went home and just had this meltdown.”

Emma Stone has nothing but things to smile about now though — she stars in the upcoming film, The Help, and in the reboot, The Amazing Spider-Man.