It’s a boy for Tia Mowry! The actress gave birth to her first child Tuesday. 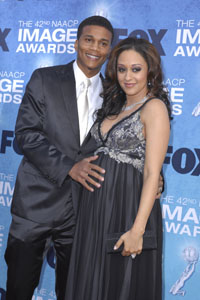 Tia Mowry is a mom! The Sister, Sister actress gave birth to her first child Tuesday.

Tia, who starred with her identical twin sister (newlywed Tamera Mowry) in Sister, Sister and currently stars in The Game on BET, said prior to the birth that she was glad she wasn’t having twins herself.

“I am so relieved I am not having twins,” she told Parenting.com. “I tell my mother almost every day I can’t believe she was able to carry all that extra weight. Having one baby kick you in the ribs is one thing, but two!?”

“Additionally, I am extremely hormonal now with one baby, so could you imagine double the hormones? That spells double trouble already. To add to the pot of extra hormones, instead of breastfeeding one, you are breastfeeding for two, bathing two, hearing two babies cry at the same time, you get the picture. That’s a lot of work!”

Tia Mowry announced her pregnancy in January. She and her husband, actor Cory Hardrict, married in 2008 after dating for six years. This is their first child together.