Linda Hogan had to have known that telling the Today show she feared for her life during her long marriage to Hulk Hogan was going to cause drama — and make headlines. Never one to shy away from a fight, Hulk Hogan has fired back. 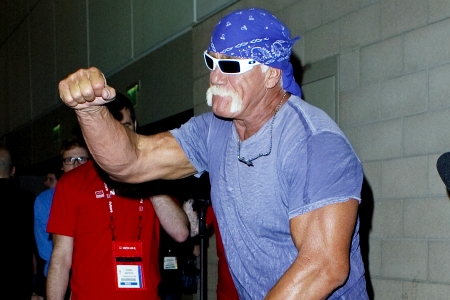 Hulk Hogan phoned in to a morning radio show Tuesday to air his side of the story. The 57-year-old told the host that Linda’s claims of abuse, which she made this morning on the Today show, are nothing but “delusional” and a “cold, blatant lie.”

The audio, available at TMZ, goes on to include Hulk Hogan saying, “Dude, I never laid a hand on her,” and then going on to describe Linda Hogan as a “non-issue.”

“If you step back and take a really good look at this — if you take the Hulk Hogan name out of her situation, her life, her career, the air she breathes… she’s out of gas,” he said. “She’s still riding on the Hulk Hogan name. Just take her and put her in the same category with the Iron Sheik and the Ultimate Warrior. They all belong together.”

A representative for Linda Hogan, currently promoting her new book Wrestling the Hulk: My Life Against the Ropes, has been contacted for comment.