Ryan Phillippe was spotted with his pregnant ex-girlfriend, Alexis Knapp, as they made a visit to the doctor. Will Ryan be a father again soon? Read on to find out.

Ryan Phillippe and his ex-girlfriend, actress Alexis Knapp, split in September 2010, and she announced she was pregnant shortly after. She says the baby is his, however, Phillippe is not sure. 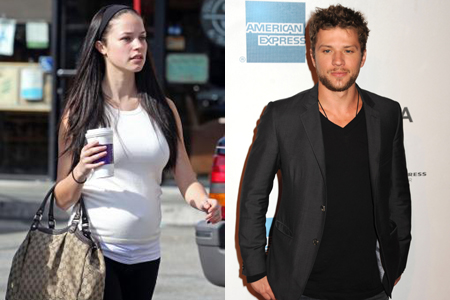 The Lincoln Lawyer actor plans on taking a paternity test after the baby is born because DNA testing now could cause prenatal complications. “Ryan is aware of the situation [and] totally prepared to take responsibility should the child be his,” a source tells People.

Knapp reportedly hired an attorney when Phillippe initially refused to pay medical bills, however, it looks like the former couple has worked things out.

Phillippe, 36, and Knapp, 21, were spotted together for the first time in Los Angeles yesterday going to get drinks at Coffee Bean and Tea Leaf before heading to the doctor’s office. It appears that Phillippe will take responsibility as the father unless he finds out otherwise.

Knapp, who will appear in So Undercover, is “really excited to be a mom” but is not speaking publicly about the baby. “Alexis has maintained her silence and will continue to do so,” her rep told Us Weekly. “She continues to appreciate the love and support of her family and friends.”

Phillippe, who has been linked on and off with Amanda Seyfried, has two kids (Ava, 11, and Deacon, 7) with ex-wife Reese Witherspoon.