In case you think Johnny Depp can’t get any hotter, check him out rocking out with a guitar and Alice Cooper. We swoon!

Johnny Depp showed he handles a guitar as well as a sword when the Pirates of the Caribbean star rocked out with Alice Cooper at a gig at the 100 Club in London. 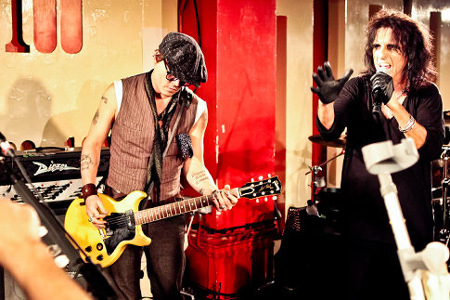 Cooper posted a picture of Depp on his Facebook page with the caption: “Johnny Depp!! Waiting to jump on stage with Alice for 18 and Schools Out!”

The rock legend gave Depp quite the introduction, saying, “The blues master, Mr. Johnny D. from Kentucky,” as the actor jumped on stage wearing a brown hat, white tank top, vest and glasses.

They performed 18, School’s Out and Pink Floyd’s Another Brick in the Wall.

This isn’t the first time Depp has rocked out on stage. He dropped out of school at age 15 to be a rock star. His garage band, the Kids, even opened for Iggy Pop before he landed his first role in 1984’s A Nightmare on Elm Street.

So, what did Alice Cooper think of Depp’s performance? “I think we could use another guitar player, right? Johnny, this whole movie thing… If it doesn’t pan out, join us, okay?” The Sun quoted Cooper as saying.

Depp is currently in the U.K. working on Tim Burton’s Dark Shadows.