Tracy Morgan found a new group of people to offend — and it’s still not funny. 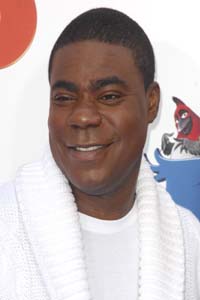 You know that filter you have that keeps you from saying really stupid things without thinking? Yeah, 30 Rock star Tracy Morgan doesn’t have that. The comedian — fresh off his ‘I’d stab my son if he were gay’ comments — found a new group of people to offend during a recent comedy show in New York.

“Don’t ever mess with women who have retarded kids,” Morgan said at a recent stand-up show in New York, according to a report in the New York Times. “Them young retarded males is strong. They’re strong like chimps.”

Wow. These comments are worse than his gay-bashing — at least the gay community can speak out and defend themselves.

He reportedly went on to talk about a tryst he had with a ‘crippled’ girl — because that’s sooooo funny.

So far, Morgan hasn’t apologized or spoken out on his recent stand-up routine. We can’t imagine how much longer he thinks he can get away with jokes like these. Yes, yes: We know that comedians are there to push the envelope — Dave Chappelle was a great example of that with his constant race jokes on The Chappelle Show.

There’s one huge difference between Morgan and Chappelle: Chappelle made light of racial stereotypes — including jokes about his own race. Morgan’s stand-up routines target groups of people and are just stupidly cruel.

Do you think Tracy Morgan should apologize for his latest comments?

Read on for more Tracy Morgan