Captain America: The First Avenger is almost here! Marvel and Paramount have released the final trailer for their latest blockbuster, which features both a muscle-bound and mini-me version of Chris Evans.

The new Captain America trailer takes us into war-torn Europe and introduces us to Steve Rogers (Chris Evans) and a young but genius Howard Stark (Dominic Cooper). Rogers is a wannabe soldier who has his work cut out for him. He’s short and scrawny but has the courage of an entire army. 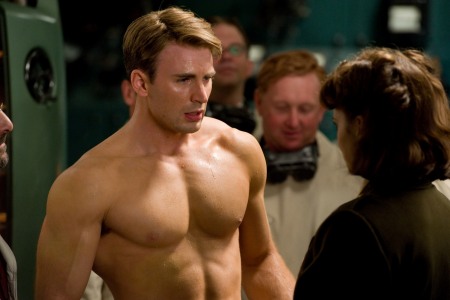 An out of the box scientist called Abraham Erskine chooses Rogers to become the first test subject for a new serum that turns men into what he calls Super Soldiers. After injecting him with the liquid, Rogers becomes tall, buff, and did we mention gorgeous?

Howard Stark tags along and designs Rogers’ weapons including his famous shield. And with help from his sidekick Bucky Barnes and the Howling Commandos, Steve goes from an Average Joe to Captain America.

In 1940s Europe, what’s a new superhero to do? Fight Nazis! Captain America has his hands full with Hitler as well as a menace called Red Skull (Hugo Weaving).

Captain America is one of the last major comic book movies to hit theaters this summer. Will you turn up to see it?