PETA has chosen two quirky comedians as their 2011 Sexiest Vegetarians in their annual contest.

The 2011 Sexiest Vegetarians are Kristen Wiig and Russell Brand! The two quirky comedians were bestowed the honor by PETA, who conducted the contest via social networks. Last year’s winners of the PETA award were Olivia Wilde (Tron) and The Biggest Loser trainer Bob Harper. 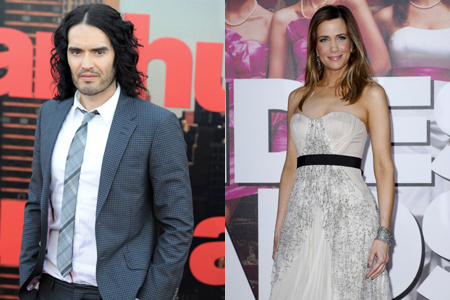 Brand, who says he steers clear of fish as well as meat, has been a vegetarian since he was 14! In fact, when asked by Kelly Ripa if he takes fish oil to keep sharp, the 36-year-old Arthur star said: “I’m vegetarian. I think it’s cruel to squeeze oil out of a fish… Cause they’re lovely little guys, aren’t they?” He then went on to say, “You shouldn’t eat animals. It’s mean to them.”

Kristen Wiig, 37, told Women’s Health magazine that her vegetarian diet helps keep her healthy. “I’m a vegetarian. I eat a lot of tofu and soy,” the Bridesmaids star said.

Tell us: Do you think Kristen Wiig and Russell Brand are the sexiest vegetarians of 2011?