A baby for Beyonce? As the singer approaches her 30th birthday she admits that was the original plan! 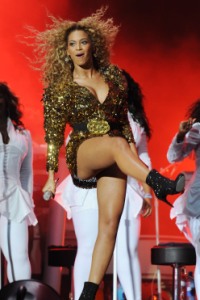 Despite numerous tabloid reports over the years that a Beyonce baby was on the way, the superstar and husband Jay Z remain a duo. That doesn’t mean her motherhood dreams are canceled per se — just on delay.

Piers Morgan, pushing the Beyonce baby talk a bit further, then asked, “Can we expect the little patter of little Beyonces and Jay Zs?”

Beyonce, who will celebrate her 30th birthday on September 4, replied simply, “Only God knows.”

One subject the private star is willing to be a smidge more forthcoming about is her husband, Jay Z. “He is amazing,” she gushed. “Jay and I have kind of made a decision that we want to be known for our music and not our relationships or scandals.”

For the time being, the only baby in Beyonce’s life is her new album 4. Following a mega concert at Glastonbury, seen here in the photo above, Beyonce performed an intimate gig at London’s Shepherd’s Bush Empire. Famous faces in the audience included Ewan McGregor, Adele and Gwyneth Paltrow.

Perhaps when the promotion of 4 slows down it will finally be Beyonce baby time?