Transformers: Dark of the Moon premieres June 29 and Paramount has provided SheKnows with an exclusive premiere clip. The movie stars Shia LaBeouf and finds Rosie Huntington-Whiteley stepping in where Megan Fox once caught LaBeouf’s onscreen eye.

Transformers heads back into history for its latest installment. Michael Bay and the entire Transformers creative team have weaved a storyline that wraps itself around the first moon landing. 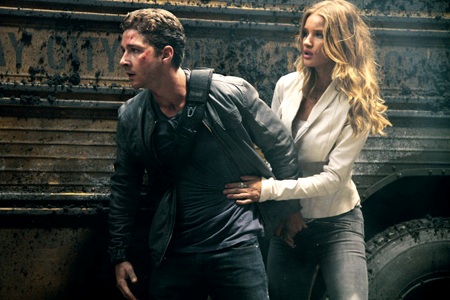 In our exclusive Transformers: Dark of the Moon TV spot, audiences can sense the urgency of the threat of the end of the world through Shia LaBeouf and Rosie Huntington-Whiteley’s eyes. The two play a couple on the verge of taking their relationship to a more permanent place when the Transformers and their universe come crashing down on an entire planet’s hopes and dreams.

One of our favorite actors, Josh Duhamel, has a bigger role in this installment as does Tyrese Gibson. Yet, it is two acting veterans that really add some true thespian power to the latest Transformers, John Malkovich and Frances McDormand.

As many trilogies do and rightfully so, the ante has been raised with director Michael Bay’s vision of the Transformers world. The film was shot in 3D and also features music contributed by rockers Linkin Park.

SheKnows presents an exclusive clip from one of the contenders for the title of summer’s biggest movie.