Jeff Probst is getting ready to make his daytime debut with a new show — in 2012. 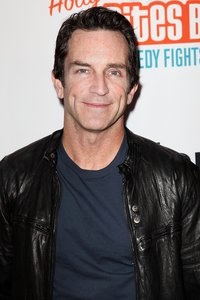 Jeff Probst is becoming the host with the most. CBS Television Distribution confirmed that they are developing a daytime talk show with the three-time Emmy winner.

Do you think his show will have anything to do with Survivor? Probably not, but Probst did say, “I am fascinated with human nature and thrilled that this show will allow me the opportunity to connect with real people and explore their stories on a personal level.”

He added, “As I continue with Survivor, I am excited to extend my relationship with CBS with this new adventure in the world of daytime.”

Jeff Probst’s latest venture into taking over Ryan Seacrest’s title for hardest-working host in the business isn’t set to see the light of daytime until 2012. The early reports do have us wondering: Is Jeff Probst daytime material?

He’s known for sitting in jungles with a bunch of crazy contestants competing for a ton of cash. Well, he’s more than just that, but we’re not sure he can fill a slot that asks people to tune in with curiosity over rotating topics.

One thing he does have going? He’s likable. We’d sit down and chat with him, but hopefully we wouldn’t get bored after a while. This, of course, is all just opinion based on early reports of what his format will look like.

Do you think Jeff Probst has a place on the daytime talk show circuit? Should we give him a chance or put him back on an island somewhere? Tell us, we want to know.