What would the scene have looked like if Princess Diana had been able to attend the royal wedding of Prince William and Kate Middleton? Thanks to a creeptastic photo created by Newsweek, we now have a visual. 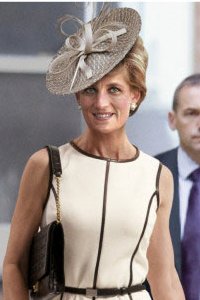 The upcoming issue of Newsweek magazine, titled Diana at 50, features a photo of the late Princess Diana walking next to her daughter-in-law Kate Middleton. Through the use of technology and making stuff up educated guesses, the article predicts what Princess Diana would have looked like and dressed like, while speculating on her love life and thoughts on son Prince William‘s new wife had she not passed away in 1997.

Scroll down to see the faux Princess Diana walking next to Kate Middleton!

As we near what would have been Diana’s 50th birthday, journalist Tina Brown, who knew the princess personally, shares her thoughts on what Diana would be up to in 2011.

“Fashion-wise, Diana would have gone the J. Crew and Galliano route à la Michelle Obama, always knowing how to mix the casual with the glam. There is no doubt she would have kept her chin taut with strategic Botox shots and her bare arms buff from the gym.”

“Remarriage? At least two, I suspect, on both sides of the Atlantic. Always so professional herself, she would have soon grown exasperated with Dodi Al-Fayed’s hopeless unreliability. After the breakup I see her moving to her favorite city, New York, spending a few cocooned years safely married to a super-rich hedge-fund guy who could provide her with what she called “all the toys” — the plane, the private island, the security detail. 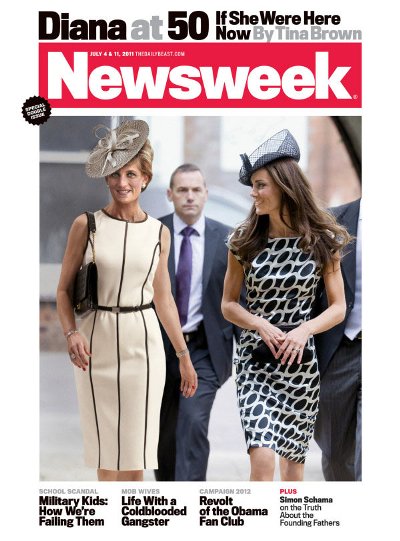 Charles and Camilla — Friends rather than foes:

“I believe her best male friend in later years would have been, poignantly, her reviled first husband. As the financier Sir James Goldsmith once put it, ‘When you marry your mistress, you create a job vacancy,’ and Charles, having married Camilla, would suddenly have found the company of his ex strangely comforting. Diana, with time, would no longer have found Charles’ causes tiresome. Rather, she would have empathized, and asked his advice about hers. After so many loves and losses, she would finally have let go of her rancor toward Camilla. The duchess’ galleon-size Lady Bracknell hat at William’s wedding would have offered satisfaction enough.”

“The rising public adoration of Kate would have afforded Diana some tricky moments. Pleased, yes. But, like Frances Shand Kydd — who, days before Diana’s wedding, suddenly burst out, ‘I have good long legs, like my daughter’ — Diana would have had to adjust to a broadening of the limelight. Her edge over Kate, of course, was her own epic of princessly suffering, which would always make Diana’s story more interesting. (‘Happily ever after’ will never have the same allure to the press as ‘It all went horribly wrong.’)

“Diana, rejoicing in her flawless Spencer pedigree, would have positioned herself as a firm defender of the Middletons against the palace snobs and ostentatiously made Carole Middleton, Kate’s dynamic mother, her new BFF.”

What do you think of Newsweek’s Princess Diana at age 50 photo and article? Interesting, creepy or both?