Ashton Kutcher is taking over for Charlie Sheen on Two and a Half Men — but how will Sheen’s character be written off? We have some ideas. 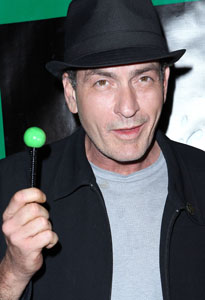 We all know that Ashton Kutcher is replacing Charlie Sheen on Two and a Half Men next season, but what we don’t know is how the character of Charlie Harper will be written off the hit sitcom. Judging from his contentious relationship with show creator Chuck Lorre, it won’t be pretty. In fact, some sources are saying Lorre is already plotting the character’s demise, including an idea to have him accidentally drive off a cliff!

While no one but Lorre knows for sure what will happen to Charlie Harper, we here at SheKnows have some ideas — just in case he needs some inspiration.

5 Ways Charlie Sheen can leave Two and a Half Men

5. Open a legal brothel in Nevada

4. Mauled by a tiger

Charlie visits the local zoo to collect a few vials of tiger blood. It goes badly.

Charlie attempts to save Rose from falling off the balcony of his Malibu condo as she is climbing over the rail to stalk him, but he slips and topples into the rocky surf below. Rose lives and attends his funeral dressed as a grieving widow, only to immediately start creeping on Ashton Kutcher.

Last we saw Charlie Harper, he and Rose were leaving for the airport. The pair board a private plane where Charlie busts out a baggie of cocaine and gives some to the pilot, whose face melts off while children weep over his exploded body.

1. Loses a fight with a warlock

Charlie tries winning against a real warlock on his mercury surfboard while wearing a golden sombrero. Not even a dozen doses of tiger blood administered through the power of his mind at Sober Valley Ranch can save him.

Tell us: How do you think Charlie Sheen should be written off of Two and a Half Men?