Natalie Portman has not officially released the name of her baby boy, however, the Israel Hayom newspaper is reporting the chosen name. Find out what unique name Natalie and her fiancé, Benjamin Millepied, may have bestowed upon their baby boy. 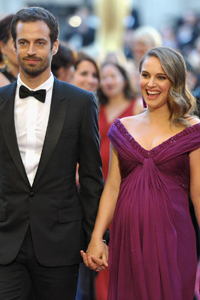 Black Swan actress Natalie Portman surprised us all when she announced last December she was pregnant and engaged to her choreographer, Benjamin Millepied. Since then, Portman has kept the details of her pregnancy and baby private from the press.

Portman, 30, and Millepied welcomed their baby boy last month but the private couple has not released a photo or the name of their baby.

We have been waiting anxiously to hear their baby name choice. Will it be unique? Weird? Traditional?

The newspaper Israel Hayom is reporting that the couple has named their child Alef, “like the first letter of the Hebrew alphabet.”

They report that the Israeli television show Good Evening with Guy Pines originally reported the baby news, with their source being Portman’s cousin.

Although Portman has not confirmed the news, the Oscar winner was born in Jerusalem so a Hebrew name like Alef is possible.

Alef is Hebrew in origin and is a form of the name Aleph. It means leader and, as stated earlier, is the first letter of the alphabet. Alef is a unique name here in the US, as it has not been in the top 1000 baby names from the Social Security Administration for the last 11 years.

Tell us: What do you think of Natalie Portman’s rumored baby name, Alef Millepied?