The f-bombs flew on the season finale of Mob Wives — read about the cat fights and shocking discoveries! 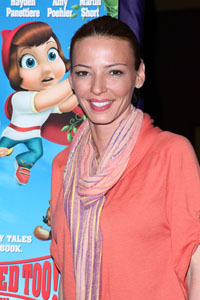 In the mafia, a sit-down is a formal meeting with the heads of “The Family” to settle disputes — sometimes resulting in murder. On the season finale of Mob Wives no one wound up dead (yet), but that doesn’t mean their sit-down didn’t result in some bloodshed.

Turns out Karen used to date Lee, who is now married to Drita. Drita revealed that Karen used to cheat on Lee constantly and hooked up with one of her boyfriends, explaining why Drita hates the woman so much.

Adding insult to Drita’s perceived injury, she finds out that Lee cheated on her between prison stints when a strange woman in her hair salon happens to know her daughter’s name. “He’s one lucky mother [expletive] I found out when he was in jail,” she says. Since she can’t kill him, she resorts to visiting a divorce lawyer.

Drita decided that a sit-down with all the ladies was the best way to wrap up her crappy week, with predictable results. Within minutes she and Karen were engaged in a knock-down, drag-out cat fight, with Drita even grabbing a candle to bash over Karen’s head.

Lucky for Karen, Renee came to her defense — she threw herself on top of her friend, protecting Karen from Drita’s insatiable rage and coming out of it with a bloody leg.

That’s what friends are for, right?

Tell us: Are you Team Karen or Team Drita?