The iconic red and black leather jacket Michael Jackson wore in the Thriller video sells for an unexpected $1.8 million at auction. 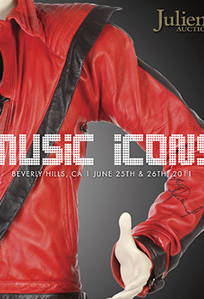 It was a thriller of an auction.

The iconic red and black jacket Michael Jackson wore in the 1983 Thriller video sold for an unexpected $1.8 million at auction on Sunday, Julien’s Auctions of Beverly Hills announced. The new owner of the jacket, Milton Verret, a Texas businessman and collector, plans to display the jacket at an Austin children’s hospital and also take it on tour to raise funds for children’s charities.

The designers of the leather Thriller jacket, Dennis Tompkins and Michael Bush, put the jacket up for bidding and were in the auction room on Sunday.

The signed jacket had an estimated worth of $200,000 to $400,000 prior to the auction, which included other memorabilia from music stars, including the Beatles, Janis Joplin, Jimi Hendrix, Madonna and Bruce Springsteen.

“Michael Jackson is a global icon and (Thriller) is his most iconic album,” said Martin Nolan, executive director of Julien’s Auctions, to SheKnows.com. “Everybody remembers the video.”

Do you have an iconic jacket or dress? If so, this would be a good time to sell. The famous Marilyn Monroe dress from The Seven Year Itch sold for $5 million earlier this month in another auction.