Bristol Palin’s prized virginity was “stolen” by Levi Johnston, but while that may make the father of her son a thief, she wants to be clear he isn’t a rapist.

Bristol Palin’s got a new book out filled with gossip about her famous family, hook-ups and breakups with Levi Johnston and life as a young single mom. 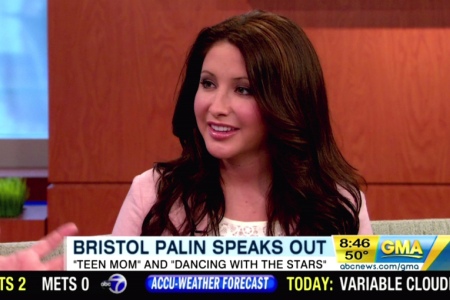 When asked to elaborate on what she meant by writing her virginity was “stolen,” Bristol Palin tells Good Morning America, “That’s what it felt like. I’m not accusing Levi of date rape or rape at all. But I am looking back with the adult eyes I have now and that was a foolish decision.”

Bristol Palin, who has made a pretty penny touring as an abstinence spokesperson, claims, “I’m not an abstinence preacher.” Yet Bristol, who says she was on birth control when she lost her virginity and got pregnant with son Tripp, has concluded, “I think if you want to prevent teenage pregnancy, that’s the only option.”

The 21-year-old isn’t censoring what she thinks about Levi Johnston for their son Tripp’s sake because, “I don’t know if Levi will be a big role model in his life at all so I’m not worried about it.”

To catch up on the best bits of Bristol Palin’s Good Morning America interview, including talk about her corrective plastic surgery, check out this video: