Anne Hathaway shrugs off nudity and bad reviews for her Oscar performance. She’s too busy working to care. 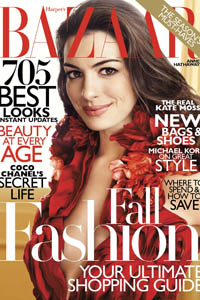 Actress Anne Hathaway holds little back in a new interview with Harper’s Bazaar in which the star reveals on-camera nudity is one big whatever, and her poorly-reviewed co-hosting of the Academy Awards with actor James Franco doesn’t matter much one way or another to her.

After Hathaway and Franco hosted the Oscars, Franco told David Letterman: “People said I was under the influence… I think I know why. I love her, but Anne Hathaway is so energetic, I think the Tasmanian devil would look stoned standing next to Anne Hathaway.”

As for getting very naked with costar Jake Gyllenhaal in Love & Other Drugs, Hathaway shrugs off her nude scenes. “I don’t get hung up on nudity. To me, it was just an extension of who she was. It was real.”

“So far, it’s worked out great,” she says. “Which has its wonderful side, of course… Mellow doesn’t always make for a good story, but it makes for a good life.”

She adds, “I think people assumed that I was a girl searching for a happily-ever-after, when for me that’s the least interesting part of the story.”
For the full interview and more photos of Anne Hathaway, go to http://www.harpersbazaar.com/annehathaway and pick up the August issue of Harper’s Bazaar, on newsstands July 12th.