Jennifer Aniston could hardly stop herself from going ga-ga over her new boyfriend, Justin Theroux, saying she’s happier than she’s ever been. 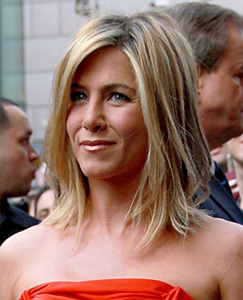 Theroux, who appeared in Charlie’s Angels: Full Throttle and wrote the screenplay for Iron Man 2, certainly seems to be having quite an impact on the 42-year-old actress. She was recently seen sporting her first-ever tattoo, which is located on the inside arch of her right foot and reads, “Norman,” after her late dog.

Not only that, but Aniston took Theroux along when she taped an upcoming episode of Inside the Actors Studio. Witnesses said Aniston could be seen winking and smiling at her new beau throughout the program. The couple was also seen out on a double date in New York with Aniston’s sometimes-costar Jason Bateman and his wife.

Supposedly, Theroux is bringing out Aniston’s “bad girl” side.

“She’s naughtier now than she’s been in years!” a source revealed. “She is noticeably more fun and open and sassier than the Jen everyone is used to.”

After getting dumped by Brad Pitt for Angelina Jolie, it looks like Aniston is ready to be happy again.