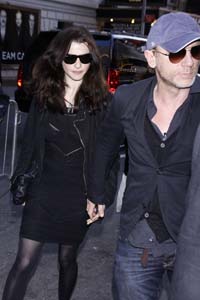 The pair married on Wednesday in New York, a source told the UK Daily Mail. Guests at the super-small ceremony included Craig’s daughter Ella, 18, and Weisz’s son Henry, four, plus two friends that acted as witnesses.

“Daniel and Rachel insisted on having a small, quiet wedding. They are madly in love and couldn’t wait to be husband and wife — but they wanted minimum fuss,” a source said.

The longtime friends — and The Dream House co-stars — stepped out hand-in-hand in the UK in December 2010, confirming questions that their pal status had morphed into a relationship. They were last spotted together in March during a shopping spree in London.

Both Craig and Weisz just got out of long relationships — Weisz spent nine years with Black Swan director Darren Aronofsky, while Craig broke it off with his longtime girlfriend, Satsuki Mitchell, last year.

We won’t get to see the couple together onscreen until The Dream House is released in theaters in September. However, we’ll be seeing a lot more of Craig with his upcoming role in The Girl with the Dragon Tattoo opposite Rooney Mara.

Congratulations to the happy — and sneaky — couple!