It’s time to bust out your self-tanner and grab your aerosol hair spray, because everyone’s favorite guidos and guidettes are returning to the Jersey Shore to film season five, after an uneventful trip to Florence, Italy. With all the restrictions put on the cast in their motherland, you can be sure to expect plenty of fist-pumping and brawling this summer at Seaside!

Seaside Heights, watch out! It’s that time of year again, when your favorite Jersey Shore invaders hit the shore for another summer of fun and frivolity. Starting Monday, June 27th, you can make certain that the boardwalk will never be the same (at least until Labor Day!) when Snooki, JWoww, Deena, Sammi, Pauly, Vinny, The Situation and Ronnie make Seaside their home away from home once again. 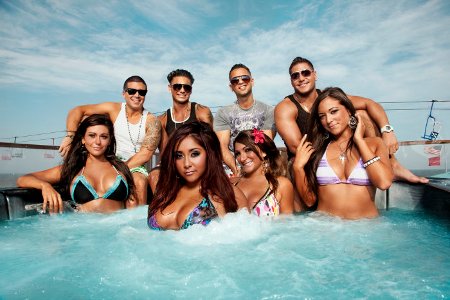 After several uneventful months in Florence, Italy, where the cast had more restrictions posted on them than ever before, they were sure happy to return home to the United States… that is, until MTV gave them a strict list of dos and don’ts upon their return. Don’t number one — no phones. Followed by — no Internet, no friends, no family… basically, they’re under house arrest until filming commences in order to keep their “chemistry” intact.

There are exceptions: Deena, Sammi and Pauly D all had prior engagements that could not be cancelled, so they were allowed to honor their commitments, but must arrive in Jersey by the Sunday before shooting starts.

It’s certain that our favorite meatballs are very happy to be back in the country that knows and “respects” them. While in Florence, they were regularly heckled by the locals. The New York Post has an irate Florentine quoted as stating, “Why don’t they get out of town? They’re all idiots. All this fuss for eight idiots.” Surely, the locals do not get their mantra of GTL (gym, tan, laundry), but it does have a nice ring to it in their native tongue, “palestra, abbronzatura, lavandeira.” On day one, a local Florence newspaper called them, “supercafoni” (translated: superboors).

Reportedly, a window sign in a pizzeria across the street from the brick oven joint where the gang worked (part of the Jersey Shore deal, you work or you’re out of the house!) stated, “Jersey Shore? No thanks!” Florence’s mayor was quite vocal in banning the show from filming at the Uffizi Gallery and other local landmarks. He also nixed public drinking on city streets and in bars.