Police have determined exactly how much Ryan Dunn had to drink before his fatal crash — and you won’t believe the staggering number. 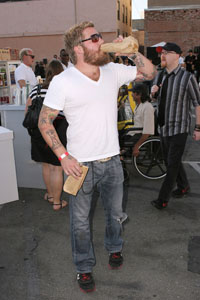 Police have pieced together the last hours before Ryan Dunn’s death and determined that the Jackass star enjoyed a staggering 11 drinks before the fiery crash that took his life and that of his passenger.

While the bar Dunn and his pals were visiting proved that they served him only two beers and six shots over a four-hour period, investigators examined video footage that showed fans buying Dunn another beer and two more shots right before he left — and likely putting Dunn over the edge.

“His BAC was likely on its way up at the time of the crash given the drinks he consumed at the end of the night,” said Sgt. William La Torre of the West Chester State Police Liquor Control Enforcement team.

The sergeant explained that it would have taken a half hour for the alcohol in those last three drinks to take full effect — about the same amount of time that elapsed between his last cheers and the crash.

Ryan Dunn’s blood alcohol level was over twice the legal limit at the time of his death.

read on for more ryan dunn