With yet another Teenage Dream single climbing the charts, Katy Perry may tie Michael Jackson’s record for having one album that boasts five chart-topping singles. If Last Friday Night (T.G.I.F.) hits number one and Perry manages to nab another number one spot with her album, she’ll break the King of Pop’s record altogether! Meanwhile, Perry already broke her own record on the digital charts.

With Last Friday Night (T.G.I.F.) making its way up the charts, Katy Perry is looking to set a record as the first female to ever land five number one songs off one album. Michael Jackson reigns as the only performer to ever score that high five with his album Bad, according to Billboard.com. 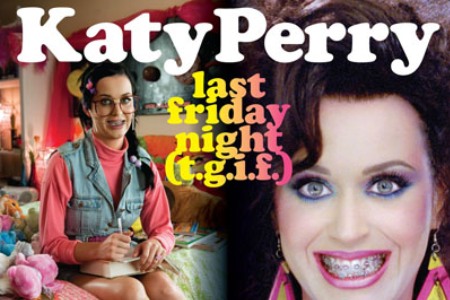 Perry could conceivably meet or exceed Jackson’s record. Of course, Perry’s Last Friday Night would have to keep climbing and bump Adele’s Rolling in the Deep off its seven-week winning streak to tie Jackson. And if she wants to break his record, she’ll have to find another hit on Teenage Dream.

Perry’s previous Teenage Dream chart-toppers include California Gurls, Teenage Dream, Firework and E.T. Back when Perry was a toddler, Jackson’s winning set from Bad included I Just Can’t Stop Loving You, Bad, The Way You Make Me Feel, Man in the Mirror and Dirty Diana.

As a side note, could you even read that list without hearing each of those hits playing in your head?

While Perry is eyeing the King of Pop’s record, she’s already broken her own digital records. Before, she boasted four number ones on Billboard’s Hot Digital Songs, as well as four 4-million-selling downloads. Since Perry released her Last Friday Night video, the track has hit number one on the digital charts. Meanwhile, with E.T. hitting the four-million sale mark, Perry has not just beaten herself, but also put even more distance between her and four-million runner-up, Lady Gaga, who only has three.

The longer Teenage Dream stays on the market, the longer the title seems prophetic. Clearly, Perry is not a teenager, but what teenager doesn’t dream of this kind of success?