It’s a hard-knock life for Will Smith and Jay-Z. The actor and rapper are remaking the stage classic Annie and they want Emma Thompson to write the screenplay! It’s a star vehicle for Willow Smith, who’s set to play the title character. 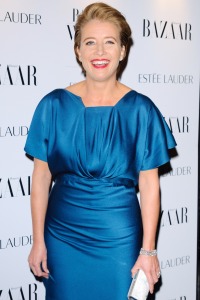 Emma Thompson is more than just a stellar actress, she’s an Academy Award-winning screenwriter. She penned both Nanny McPhees, 1995’s Sense and Sensibility and scored her Oscar for 2005’s Pride and Prejudice. The lady’s got talent!

Do you think it’s just a coincidence that Smith is going after Thompson for the job of writing the remake for Annie? We think not! Both Will Smith and Thompson are currently shooting the upcoming sequel Men in Black 3. We wouldn’t be surprised if they were talking during a lunch break and Annie came up in conversation.

Thompson is currently in negotiations for the gig and we hope it pans out. She’s such a good fit. Her previous work is great and she really knows how to write for young women and children. If she does take the job, there’s no word on whether or not she’ll also write a part for herself. If she does, it would be a welcome addition!