Kim Kardashian’s wedding ring isn’t the expensive stunner we all thought it was, according to her sister Khloe Kardashian. 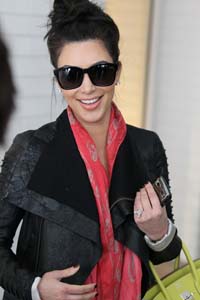 “Oh, it’s fake. You can suck on it, like a lollipop,” Kardashian told PopEater. “Kim’s ring is from Nordstrom’s. $7.99… But no one knows if it’s really real or fake these days, so why do we care?”

Yeah, she was likely joking — that Khloe is such a kidder, isn’t she? Remember that time she said her sister was going to be a bridezilla? Yeah, this is another veiled jab at her sister.

And now for what we all want to know: Will she get married to fiancé Kris Humphries in an E! special? But, of course!

“It will be a two-hour stand alone special,” a source close to the show told PopEater. “[Kim] is so used to having cameras follow her that she doesn’t even notice them any more. Kim really wants her fans to celebrate with her on the most important day of her life.”

And don’t expect her to go anywhere after she gets married.

“Anyone that thought these girls were going to be stars for 15 minutes like Paris Hilton was wrong,” another source said. “We are now on season six of their show and it shows no sign of slowing down. Kim’s wedding will be ratings gold… then we can look forward to the episode when she has a baby.”

In other words, it’s a Kardashian world — we’re just living in it.

Will you watch a Kim Kardashian wedding special?